ANTICIPATES : It’s not about winning or losing but about seeing it before it comes 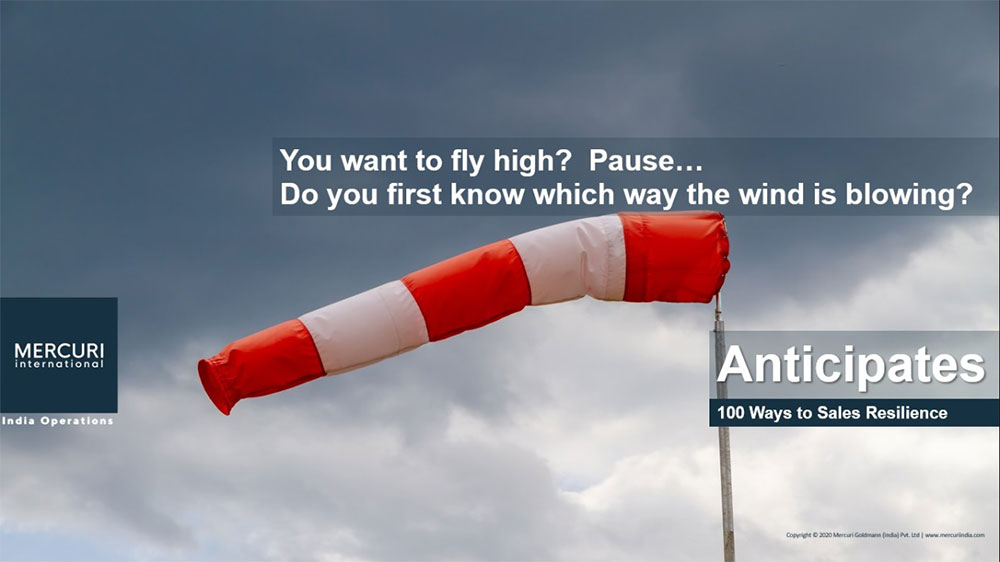 ANTICIPATES : It’s not about winning or losing but about seeing it before it comes

“I have a very unusual case study to share with you” announced the Sales Trainer with a broad smile.

The Sales Managers in the workshop exchanged puzzled glances. Now what was this?

“So, what makes it special?” said the trainer. “Three things. One, there are no human beings in it, Two, it was written more than 2000 years ago. Three, it is super short. Ok, you guessed it, it’s a fable for children. Here’s what you have to do. Read and discuss the story in your groups for 10 minutes. Identify the one sales management lesson you can get out of it. Describe it in one word. Only one word, not even two. Ok?”

Story of the Grasshopper and the Ant

It was a hot summer day in the forest and a Grasshopper was hopping around, chirping and singing. He saw an Ant struggling and tottering along carrying a ear of corn many times it’s size .

“How about coming and playing with me" said the Grasshopper, “What do you gain by toiling like this when the sun is shining and the entire forest is happy ?"

“Our Queen has ordered us to gather and store food," said the Ant, “I’m young but it seems a season will come when we won’t find food outside our nest"

“Nonsense” said the Grasshopper; “Look at the plentiful food everywhere right now. Don’t you see them? Why will you suddenly stop getting it?"

But the Ant said nothing and continued to toil. Weeks turned into months and winter arrived bringing snow and sleet, The Grasshopper could find no food. It had to scrounge for survival. It watched from afar as the ants distributed the corn and rice they had collected in summer. The Grasshopper had learned his lesson.

Discussion Question: If the ants were a sales team and the Ant Queen was their sales manager, what’s the lesson that ants taught the Grasshopper? What word would describe it?

Ten minutes of buzz followed as groups discussed the story between themselves. Then one group volunteered. “Is it Prepare?”

"Good effort” said the Trainer "The ants were preparing alright. That refers to their effort of collecting food. But what was the behaviour driving that action?”

Another group tried “Plan?” “Closer” commented the Trainer “but not quite there. Planning is about the details. What we want to identify is the behaviour that the Ant Queen demonstrated. Here's a clue: It is an A word, with the second letter N and ends with an E.

The third and last group came forward. “Anticipate?” they asked. “Exactly” said the Trainer “The ants anticipated that winter or other unexpected problems would bring food shortages. Because they anticipated, they planned and prepared to collect and stockpile food. Anticipation is a strongly positive behaviour that creates resilient sales teams”

Exceptional Sales Leaders Have a Fine Sense of Anticipation

Exceptional sales leaders successfully steer their teams through disruptions and difficult times because they have a fine sense of anticipation. They can instinctively ‘sense’ disruptive changes and prepare their teams in advance.

When they anticipate, they neither stare at a crystal ball with rose tinted glasses nor morbidly worry themselves sick about every little thing that can go wrong. They realistically test all the assumptions their team has made in setting its goals.

This translates into positive team behaviours that build resilience. As the pandemic showed, sales teams that had anticipated and prepared for potential disruptions by routinely adopting frugal, cash conserving practices and regularly exploring alternative markets and sales strategies coped much better with the sudden collapse in economic activity. It has been repeatedly demonstrated that anticipating and adapting are key to overcoming uncertainties and volatility

Here are 5 ways in which exceptional sales leaders promote anticipation:

To get a fine sense of base, best and worst case scenarios resilient sales leaders use 3 simple anticipation questions – (i) What’s the probability of our assumptions going right? (ii) What can go wrong and by how much? (iii) What else can happen?

Expect the Unexpected and Master it

Anticipation helps outstanding sales leaders prepare their teams to stay proactive and excited about embracing change. And when plans misfire, they check for what they failed to anticipate and learn from that experience.

With repeated practice, anticipation trains them to expect the unexpected and master it when it arrives!

Pause to reflect:  “It has been repeatedly demonstrated that anticipating and adapting are key to overcoming uncertainties and volatility”

Action Question: Go back to the last 3 deals you and your team won or lost. Did you know which way the wind was blowing before you got started on the deal? How could you have known? How can you get better at it in your upcoming deals?

Related Readings: Mercuri Mail Dec 2012 Must Read feature on “Expect the Unexpected (Or you won’t find it)

About the series:  This is the 65th in a series of 100 Posts that seek to build your #Sales Resilience.. as an individual salesperson, as a sales team, and as a sales organization. Because a Resilient India needs Resilient Sales. 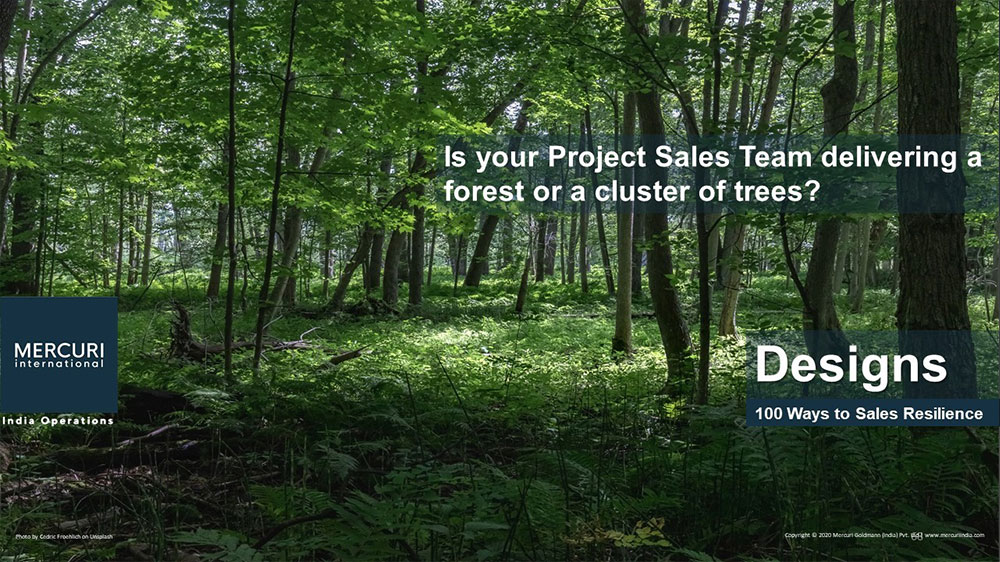 What’s the big secret of delivering unforgettable purchase experience in project selling? How do you get the price and referrals you want without even asking? Answer is in one word … 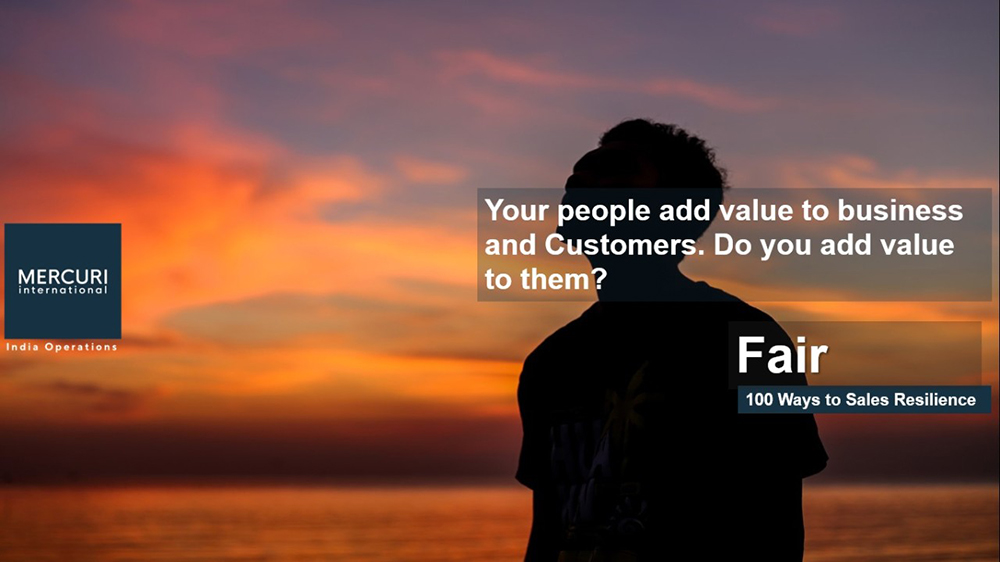 You count on your team to achieve numbers and add value to Customers and business. What can your team count on you for? Are you future-proofing them?