OWNS: Gives credit for success and shoulders failure, inspiring people to do the same 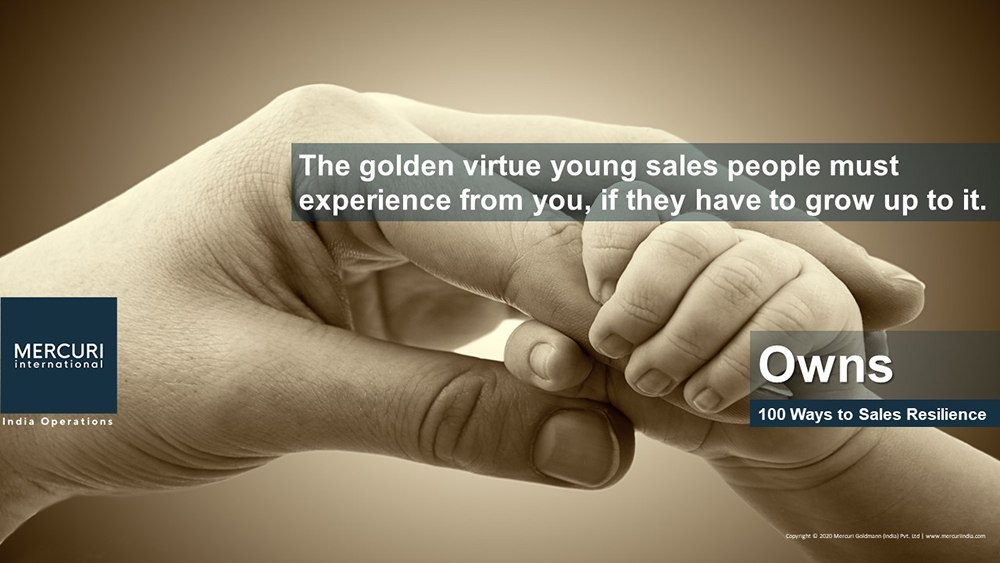 OWNS: Gives credit for success and shoulders failure, inspiring people to do the same

“Who wants to talk on Week’s Inspiration?” asked Huzan. On Sunday afternoons it was Huzan’s job to compere the online meetings of MadOverSales (MOS) Group.

Formed for young sales managers passionate about improving their sales performance, MOS met for an hour on Sundays. The idea was to exchange news, notes and stories, all with the intention of getting better at the science and craft of selling and leading sales teams.

“I have a story to share” Suresh volunteered “A year ago, when our former Sales Head became the CEO of our company, there was the mandatory townhall. I have attended many. But this one was truly memorable. The new CEO told us an inspiring story of his life, that he said he remembers as if it happened yesterday. Here is what he said:

“I started my sales career with a mid sized company, that employed a huge sales force. I had to call on homes like the Fuller Brush salesperson American books talk about, demo the product and make the sale. It was hard. It was frustrating. But it taught me a lot about sales. It also taught me humility and gave me a huge respect for the salesperson. Soon, I was selling enough to crush my quotas. I managed to get some celebrity Customers as well. After a year of slogging to succeed, I was called to our Zonal Head’s office one day. I reached her office with a mix of excitement and fear. What was this about?

She greeted me with a smile and waved me to sit. Remember those were days when meeting meant only face to face. She had a sealed envelope on her desk. She said “You are doing a good job. Am impressed with you. I recommended your promotion, and it has been accepted. You stand to lead a team of five reps now. In your new position, you will still continue to perform as an individual salesperson, also support and inspire your team of five to reach their targets. You can of course decline this offer and continue as an individual contributor. And you will have my complete support, in making a great career as an individual contributor. No one will ever know we even had this chat. The choice is yours. What do you say? Don’t think much. Just tell me what comes up for you”

I paused. I had to think through this, though she asked me not to think much. She sensed my predicament, and continued.. “Think of it this way.. Until now, at work, you have been responsible for your decisions, your sales, your performance, and your earnings. You have done well for yourself. You can grow in this role, and do very well for yourself and your family. You are responsible for exceeding the expectations your family and friends have of you. And you are doing it well. Am happy I have been able to support your ambition and efforts, and I will.

From the moment you sign up for your new role, you will also be responsible for the performance of your five people, for supporting them in exceeding their own expectations of this job, and the expectations that their families and friends have of them. In one stroke of pen, your family multiplies by five. Do you have shoulders strong enough? I think you do. I can’t do much if you don’t grow up to feel it. So, am asking you to make a choice. Should I give this to you?”

I stretched my hand to accept the envelope and felt an immediate rush of gratitude and challenge at the same time. As I uncapped my pen and signed on the dotted line, she said “We will do this together. You will go a long way… I will be sad if you don’t go places”

Friends, that lesson went in right between my eyes, when I was just 24, and it has been hardwired in me for life, My family at work grew bigger and zeros got added to my team number. 5 became 50 that grew to 500. But my approach to building resilient sales teams has remained the same. Own up. It is an undeniable fact that all that’s ever achieved is always the team’s effort. So credit your team with all the wins. Step back and join the cheering. And if outcomes are unfavorable, irrespective of who is at fault, squarely take them all on your shoulders. That’s the only way to grow shoulders that are strong enough and broad enough for bigger challenges”

TO REFLECT: “Outstanding sales managers get their people to experience from them, the power of radical ownership.”

ACTION QUESTION: What are 3 ways in which you can get your people to experience the power of ‘ownership’ in the way you manage them?

Outstanding sales managers get their people to experience from them, the power of radical ownership. “The buck stops with me” they say, and they mean it. “The neck of the bottle is always at the top” they say, and they mean it. At a very young age, such inspiration sticks, and nurtures a resolve to live the same golden virtues. Such inspired teams go for the kill, because they know they wont get killed if they miss it. And, over time, they grow to be clones of the leadership they experienced.

Ownership is the golden virtue that builds resilient sales teams. And the way to make it happen, is to let your people experience it in the first place.

Takeaway Quote:  “Responsibility equals accountability equals ownership. And a sense of ownership is the most powerful weapon a team or organization can have. - Pat Summitt

About the series: This is the 54th in a series of 100 Posts that purport to build your #Sales Resilience.. as an individual salesperson, as a sales team, and as a sales organization. Because a Resilient India needs Resilient Sales. 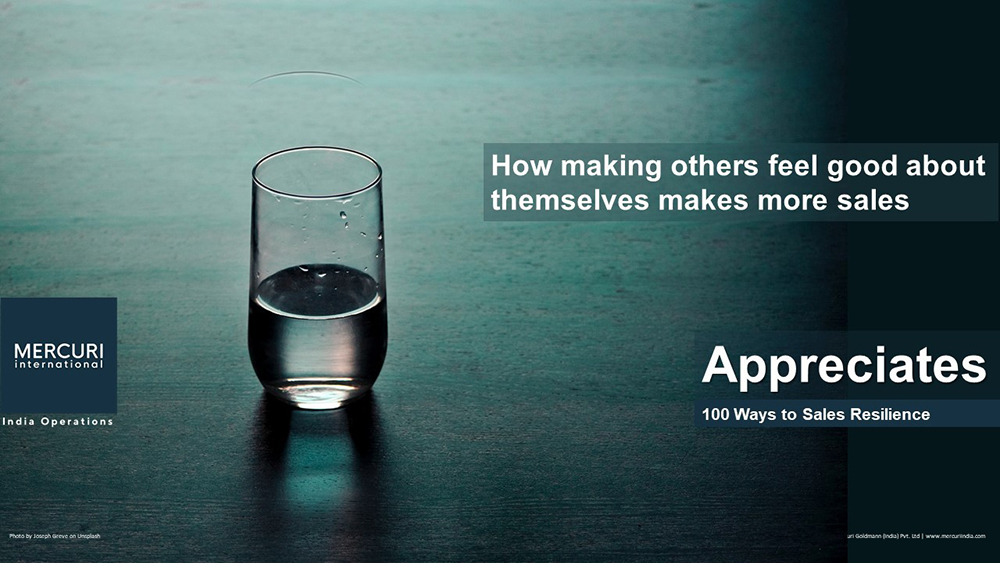 51.APPRECIATES - Acknowledges the positives in all sales situations

When the markets throw them to the wolves, Champions come back leading the pack. How do they do that? 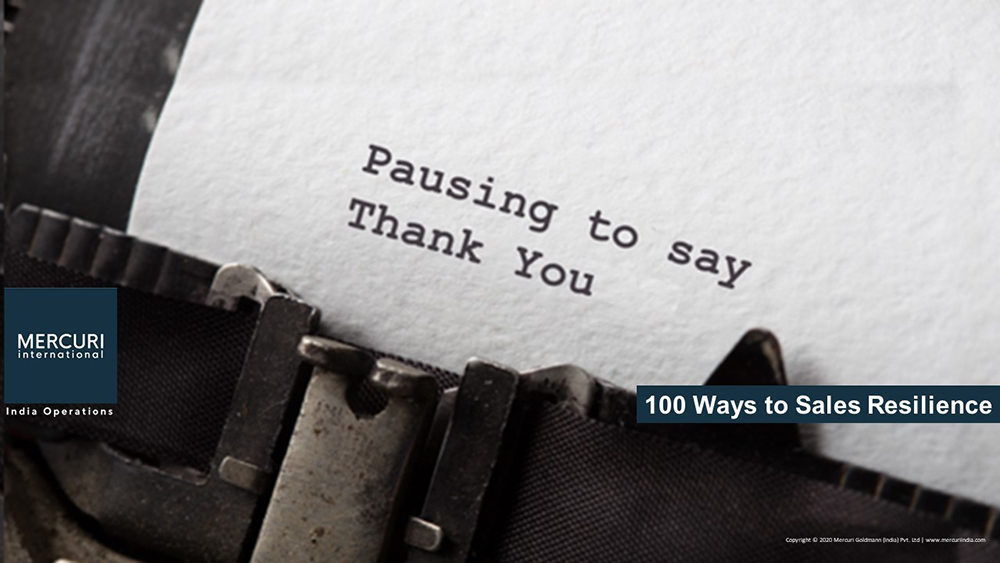 Dear Reader, Here is our Saturday Summary, for those of you who may have missed us during the week. How about catching up with the posts in this thread, and also making a contribution to the needy in this time?